Insatiable is one big messy story with hints of good intentions. 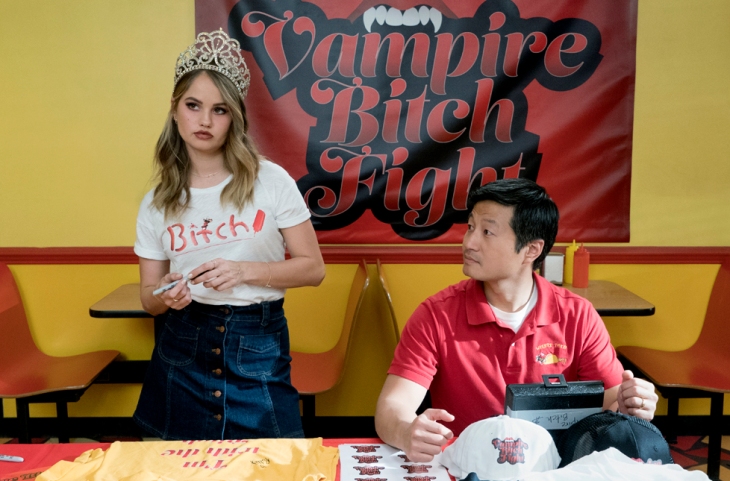 Before its premiere, Insatiable (2018) was already facing backlash for body shaming fat people in its trailer. After Netflix dropped the 12 episode Season 1 on Friday, critics from all media outlets have got nothing nice to say about this show, which is promoted as a satirical dark comedy drama.

Insatiable’s trailer pretty much sums up the plot of the “Pilot” (S01E01) episode; the remaining 11 episodes explores many controversial topics. Like what Patty narrates in the trailer, “What can I say? This story is full of some crazy shit.” Crazy shit, indeed.

Insatiable starts off with summarising Patty’s life prior to her 70 pound weight loss. The 17-year-old teen was basically eating her feelings on weekends and binging Drew Barrymore movies with her bestie Nonnie (Kimmy Shields), who is secretly/not-so-secretly (to audiences) in love with her. 3 months later and a punch in the face, Fatty Patty is now Skinny Patty. She’s gorgeous on the outside, but still struggling to find the confidence and beauty on her inside. She also gains this insatiable need to take revenge on the people who have bullied her when she was fat. After meeting the disgraced lawyer and pageant coach Bob Armstrong (Dallas Roberts), Patty develops a completely inappropriate crush on him and decides to participate in pageants with Bob as her coach.

I spent much of my Friday and Saturday binge-watching all 12 episodes of the show, and I can’t help but wonder if I would have formed a good opinion about the show had I not been aware of its backlash. There were certainly a few episodes and moments in the show that I enjoyed, but much of the show’s writing is so weak that it created a mess for its story.

Let’s start with what’s bad:
The messy writing in the show
Eleanor Stanford from The New York Times has put into words what I feel when I watched this show.

She writes, “The creator Lauren Gussis’s approach seems to have been to throw as many inflated, controversial plot points as possible against the wall to see what sticks.”

It isn’t just the controversial plot points such as molestation, rape, pedophilia, body image, and polygamy that takes up much of the show’s screen time. Other topics of adultery, stalking, drugs, kidnapping, coming-out, LGBTQ, abortion, demonic possession, and bullying are also explored in the show. The vast plot points are what confuses me as a viewer, as it’s hard for me to get a grip of what this show is actually about. In the beginning, it felt like the entire show was going to be focused on the beauty pageant story arc; but in the finale episode “Why Bad Things Happen”, the show took a pretty dark turn from its usual ridiculousness with Patty actually admitting that she committed two murders in the same day—but only one murder is depicted for viewers to see. The finale also leaves the show and its characters unresolved. Patty and Bob are back where they originally started; Patty doesn’t actually get the beauty validation she wanted because audiences don’t get to see her compete in the regional pageant; Bob is left alone and miserable after being unable to fix his relationships.

Poor character development
I really enjoyed Ryan’s performance as Patty. She emotes really well, and is able to transition from being a nice girl to an awful person in a believable manner. However, despite the show having 12 forty-minute long episodes to develop its characters, I’m still confused with who Patty actually is. The show doesn’t answer the question of whether Patty is bad or good; and this is something that the character herself is struggling to find out throughout the season. There are many instances where Patty would say one thing, but end up doing the opposite. One example would be Patty having a crush on Bob and even describing him as a “DILF”; but she ends up dismissing those feelings in the later episodes because she and Bob’s son Brick Armstrong (Michael Provost) are suddenly into each other. Then literally in the same episode where she got together with Brick, she breaks up with him and gets together with Christian (James Lastovic). The story transition here is absurd; though it is important to note that in “Bad Kitty” (S01E09), Bob does mention that Patty might have a borderline personality disorder, but however, this is not explored further and is only mentioned in passing. Ben Travers from IndieWire describes the flaw best.

He writes, ““Insatiable” often treats its characters like props, in that they do whatever is needed to motivate more drama, instead of what they would actually do if they were real human beings.” 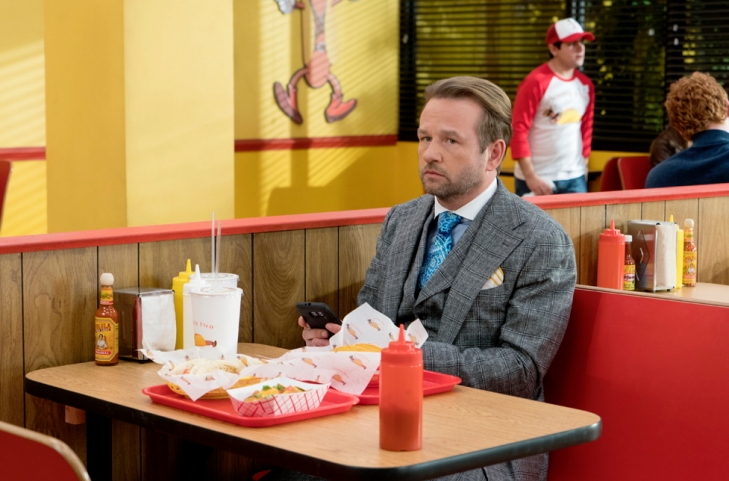 The development of the other main character Bob is also problematic. One of the shows twist comes in “Wieners and Losers” (S01E08), where it is revealed that Bob’s arch-rival “Hot” Bob Barnard (Christopher Gorham) is closeted-gay and has been in love with Bob since he was 14. It’s crazy to me how Bob, who has been complaining about Hot Bob since the “Pilot”, can suddenly decide to fall in love with him and engage in a failed-polygamous relationship together with his wife Coralee (Alyssa Milano). This reiterates Traver’s argument that the characters on Insatiable are props, and they are used to create drama—often unnecessary ones.

Everyone is really self-absorbed and the show wants viewers to know that
I kid you not, in literally every episode of Insatiable, there will be one character—if not Patty—who will blatantly mention something along the lines like, “This is supposed to be about me”. I can probably write a separate post about all the times the characters on Insatiable talk about themselves, but that would be a waste of my time. The problem with showcasing egocentric behaviour on a TV show is that they shouldn’t overdo it. In Insatiable, it’s as if the writers want viewers to pick up the fact that everyone on this show is self-absorbed. At a certain point, I got so infuriated with this trope that I went on Stardust to react to it.

Let’s move on to what can be considered as good:
The show’s consistency in being a fangirl of Drew Barrymore

If there’s one consistent thing that Insatiable has done—is prove that it can be a true fan of Drew Barrymore. The actress is referenced in multiple episodes of the show. In “Pilot”, Patty and Nonnie are seen binge-watching her movies; Patty also name-drops Amy Fisher, a character that Drew Barrymore plays in The Amy Fisher Story. In “Skinny Is Magic” (S01E02), Patty mentions to Nonnie that she watched Firestarter—a movie starring Drew Barrymore—when she was drunk the night before. In “WMBS” (S01E04), Patty references Drew Barrymore’s movie Poison Ivy. In “Dunk ‘N’ Donut” (S01E06), Nonnie asks Patty if they were going to binge the first season of Santa Clarita Diet together. In “Miss Magic Jesus” (S01E07), Christian asks Patty to run away with him to Hollywood; and she gets excited at the idea of maybe being able to meet Drew Barrymore; she also name-drops another Drew Barrymore movie Guncrazy. In “Winners Win. Period.” (S01E11), part of the show’s plot centres around a Drew Barrymore book signing that audiences don’t get to see because Patty ends up not going to it; additionally in this episode, Patty also seeks inspiration from Drew Barrymore and follows the mantra: “the power of making amends”. In “Why Bad Things Happen” (S01E12), Drew Barrymore’s book signing is mentioned in the midst of an almost-threesome between Bob, Hot Bob, and Coralee.

Nonnie’s self-discovery of her sexuality

Though the earlier episodes of this show tried to drag out Nonnie’s coming-out story for as long as possible and made her look like a creepy secret lover of Patty’s; I’m just glad that she finally came to terms with her own sexuality in her own way. It only took six episodes for Nonnie to have a heartfelt conversation with Donald Choi (Daniel Kang) about her feelings for Patty; and confess her romantic feelings to Patty herself; but it’s fine, because that was one good moment in the show that I enjoyed. 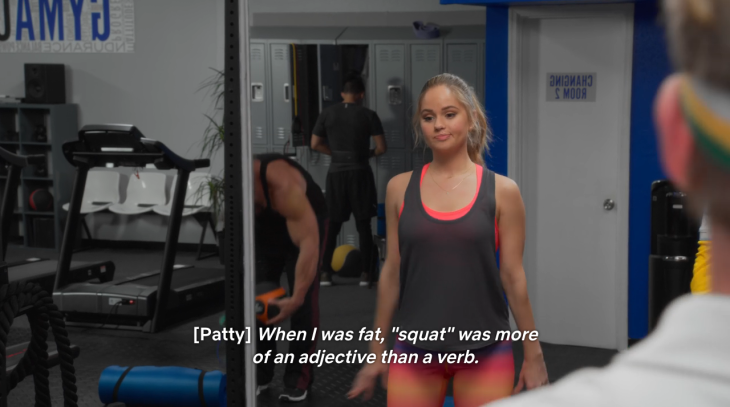 “When I was fat, “squat” was more of an adjective than a verb.” – Patty Bladell CREDIT: Screenshot from Netflix

If there’s any takeaway from Insatiable, I guess it tries to show that issues with the self don’t go away even when you’re skinny; and that body size does matter in society, as Patty is treated differently from when she was fat. The way they portray it might be vague and sometimes contradicting, but at least it comes from good intentions? The jokes in the show are definitely subjective to a viewer’s personal taste; and I think this show isn’t meant for adults who have been exposed to long hours of quality television.

It is unclear if Insatiable will be renewed for a Season 2. The show itself definitely needs a second season to answer unresolved issues, and it also has the potential to carry on with its beauty pageant story arc. I personally think it’s a 50/50 possibility because Netflix seems to know how to piss audiences off by renewing 13 Reasons Why for a third season, despite its controversies from its first two seasons. The question here to ask is…