Creepy, thrilling, and intense—YOU knows how to keep its audiences on the edge of their seats.

Penn Badgley stars as Joe Goldberg in YOU. CREDIT: Lifetime

YOU (2018, developed by Greg Berlanti and Sera Gamble) is based on the novel of the same name by author Caroline Kepnes. Set in New York City—the story follows bookstore owner Joe Goldberg (Penn Badgley) who falls in love at first sight with his customer Guinevere Beck (Elizabeth Lail). He then becomes obsessed with her in a super creepy way, and does whatever in his power to make her fall in love with him.

Watching Badgley play this creepy-psychopathic-stalker character Joe felt reminiscent to his character of Dan Humphrey in Gossip Girl—except Dan probably isn’t one to have murderous tendencies. Joe is manipulative towards people, but kind and caring at the same time. He puts in a tremendous amount of effort in loving Beck and does whatever it takes to make her happy. Yet at the same time, Joe is also oblivious of the wrongdoings that he has done in the process of getting a girl to love him.

There’s a lot of voiceovers being used in the show to narrate Joe’s thoughts. His non-diegetic inner-monologue illustrates his true intentions to the audience and not the characters; thus, audiences know that Joe is crazy, but the girl he’s infatuated with—Beck—does not. 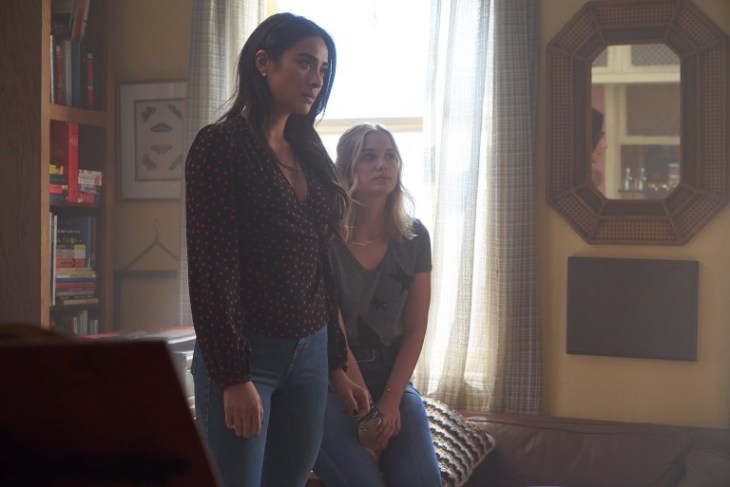 Shay Mitchell stars as one of Beck’s best friends Peach Salinger (left) in YOU. CREDIT: Lifetime

YOU doesn’t just focus on the ups and downs of a boy-girl relationship. One of the many obstacles that Joe has to conquer to win Beck over is getting rid of Beck’s best friend Peach (Shay Mitchell), whom from the very beginning is an unlikeable character. I personally don’t like Mitchell in this role, where she’s playing a super bitchy and self-centred person; I much prefer seeing her in the girl-next-door role, as seen in Pretty Little Liars. I had the impression that Mitchell was going to be in the series for a long time—including Season 2—so when she was unexpectedly murdered by Joe in “Amour Fou” (S01E06), I was shook.

Peach wasn’t a very good friend anyways, so she will not be missed by me. There was a not-so-subtle queerbaiting of Peach and Beck, which was first suggested by Joe to Beck that Peach likes her more than just a friend but doesn’t want to admit it. I think Beck was aware of it when Peach locked lips with her in the same episode that she died. This makes me want to see more of their past friendship and how they actually met, because their backstory is not actually depicted on-screen.

John Stamos stars as Dr. Nicky in YOU. CREDIT: Lifetime

Beck, the one that everyone is going gaga for, isn’t exactly a likeable character either. She’s selfish, uncommitted, dependent, and clearly a liar. In “Everythingship” (S01E07), the writers actually managed to trick us into thinking that Beck is pure, and Joe is once again the insecure crazy boyfriend. Here, Joe is convinced that Beck is cheating on him with her hot therapist Dr. Nicky (John Stamos); he follows Beck out on the street and when Beck catches him, he demands to see her phone. That’s when Beck flawlessly delivers this line:

“If you do this, it means there is absolutely no trust between us, and if we don’t have trust, we have nothing.” – Beck

Joe, convinced that he’s thinking too much, leaves Beck alone. And the duration of their breakup—you guessed it!—lasted for a good one episode, but in the series’ timeline it has been 3 months.

This series is honestly really refreshing and addictive. As bad as Joe is, I can’t help but root for him sometimes because his character feels so pitiful. And in the end, he wins by getting away with murdering Beck and framing Dr. Nicky for all the past murders he has committed. It’s crazy how sick one can be and how he doesn’t realise how wrong he is about everything.

YOU will be available on Netflix as one of their “original series” in end December, but trust me the experience of this series is better when you’re watching it weekly—because the anticipation of waiting to know what happens next is electrifying.