Locke & Key is an ambitious and intriguing series that leaves viewers with many unanswered questions. 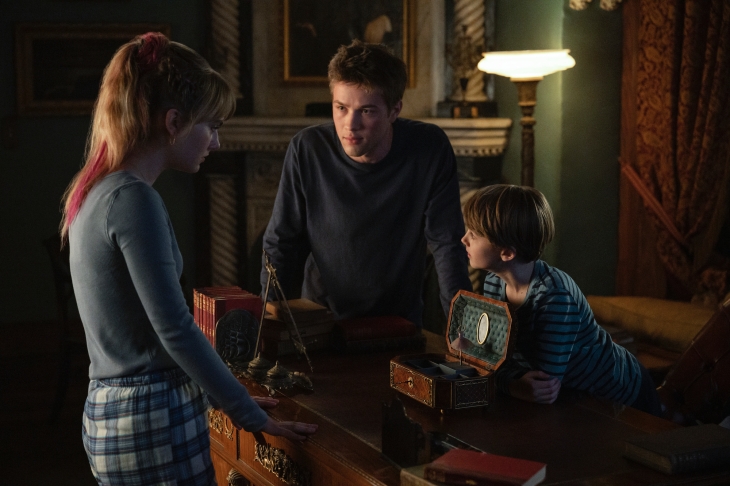 With a cast that is pretty much unknown—except for the twin brother of Shawn Ashmore, Aaron Ashmore, who plays the supporting role of Uncle Duncan—Locke & Key (2020, developed by Carlton Cuse and Meredith Averill) delivers an average premiere season with a finale that leaves viewers with more questions.

Based on the comic book series created by Joe Hill and Gabriel Rodriguez, Locke & Key follows the Locke family—Nina (Darcy Stanchfield), Tyler (Connor Jessup), Kinsey (Emilia Jones) and Bode (Jackson Robert Scott)—who just moved from Seattle to Matheson, Massachusetts after their father Rendell (Bill Heck) suffers a tragic death. As the family settles into their ancestral “Key House” which looks eerily similar to “Hill House” from The Haunting of Hill House—the youngest of the family, Bode, starts discovering magical keys in their home, which he and his older siblings must now protect it from an evil demon nicknamed “Dodge” (Laysla De Oliveira).

Locke & Key Season 1 has many loopholes and unanswered questions. Certain parts of the show are lazily written to conveniently weave in bigger storylines. For instance, Kinsey’s “fear monster” gets taken out by herself in “Head Games” (S01E03), which in turn serves as a device for her character to make mistakes in the later episodes. These mistakes also conveniently lead to a chain of events for the series.

The series relies heavily on special effects in certain episodes to create a magical and supernatural show. However, not all aspects of it look perfect and the special effects actually end up making the show look cheap—especially in a scene where Bode flies around as a ghost.

Despite a pretty much unknown cast—at least to me—I thought the performances in Locke & Key were good. Jessup’s Tyler, Jones’ Kinsey and Scott’s Bode were all incredibly well-portrayed as children who are recovering from trauma.

If this series is popular enough, I’m certain it will get a Season 2. I binged the entire first season within a day and I’m quite sure that I’m not the only one. The show may have its flaws, but it’s extremely bingeable.